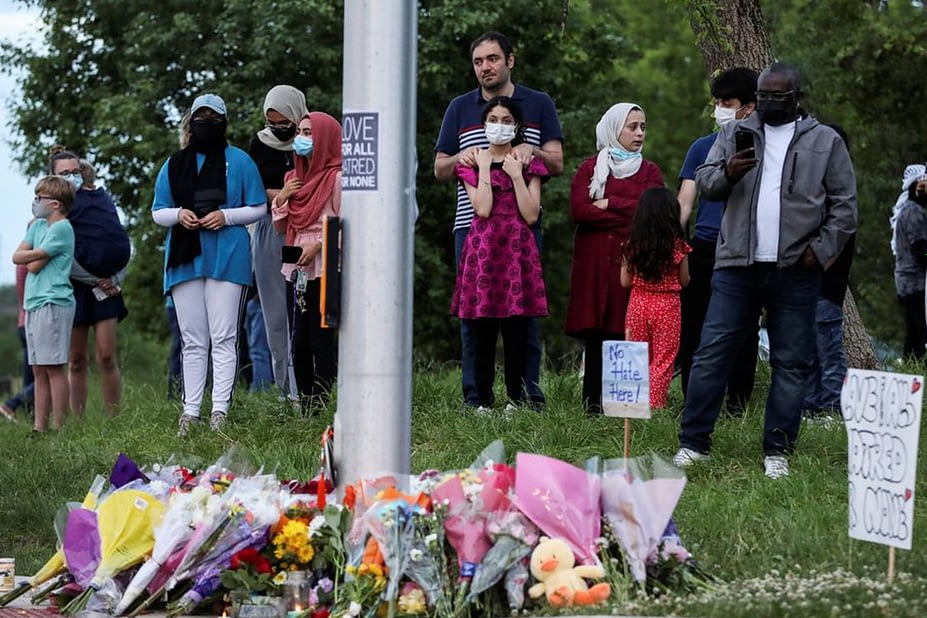 Man Attacked A Family With His Truck Because They Were Muslims

(Quoted By The Police)

On a beautiful evening in London, Ontario, just like every other day, the Afzal family were on a walk as they became prey to a hit and run accident which at first looked like one. Still, after further investigation, the police stated that this was manslaughter based on their religion and that the family was run over by a truck because of the terroristic terminology known as Islamophobia.

The family was immigrants for 14 years, living a happy life in Canada. Afzal family involved in Canada’s truck accident consisted of a father named Salman Afza,46; his wife Madiha 44; their daughter Yumna, 15, and a 74-year old grandmother whose name was not mentioned by relatives of the victims, while a 9-year-old son, Fayez was the sole survivor in this dreadful incident. How cruel can life be to such an innocent being who is now left with nothing but a long-lasting memory of this brutal truck accident?

While addressing this truck accident in Canada’s parliament house, their Prime Minister said that this was a terrorist attack influenced by extremist groups and is the definition of Islamophobia which does not even allow a family to peacefully stroll in the evening, especially now when the quarantine life is gradually on the decline and the only enjoyment, for the time being, is an evening walk.

“Many Canadians have been enjoying evening walks to get fresh air after long days at home during the pandemic. But unlike every other night, this family never made it home; their lives were taken in a brutal, cowardly, and daring act of violence. This killing was no accident. … Canadians are outraged by what happened on Sunday. And many Muslim Canadians are scared.” (Canada’s Prime Minister, Justin Trudeau, on Canada’s truck accident).

Pakistani Prime Minister also believes that this was an act of hatred towards innocent groups of people. According to him, Islamophobia is on the rise in Western countries as the Western media would have treated this issue with more enthusiasm if a Muslim caused this Canada’s truck accident.

After being arrested, the twenty-year-old suspect mentions that this attack was pre-planned while the police investigated this matter of Canada’s truck accident in depth. The suspect, Nathaniel Veltman, works on an egg farm. The farm’s CEO stated that the news of the truck accident was devastating and said that he has commiseration for the victims of this accident.

Justin Trudeau said that such an act of terrorism and extremism is intolerant for a country like Canada. He believes that this scenario will create a negative image, especially after revealing to the public that Canada’s truck accident was an act “motivated by hatred.” In honoring the departed souls, citizens decorated the light pole near the incident with flowers. In memory of the members of the Afzal family, a vigil was arranged in a local mosque.

If If you want any digital marketing services then call us. Tribe-D is the best SEO Agency and offers SEO Services, Web Development Services, Content Writing Services, PPC services, Social Media Marketing, and others. Contact us for more or visit our Tribe-D Facebook Page.